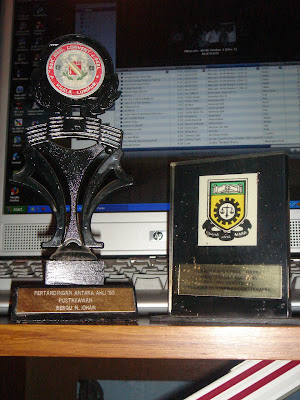 The one on the right was not even meant for me. It was supposed to be a token for judges but I took it because I want a souvenir for that event - College Open Day. Hey, give me a break. I was a bit of a nerd back then.

The one on the left is the one and only trophy I got throughout my entire school career. I got second place for a Scrabble tournament among librarians. Seriuosly, I'm not kidding.

I don't need anyone to tell me how pathetic my school life was. I was so average. I don't hold any position in class, not even AJK Kebersihan Kelas. I was not active in anything. I wasn't athletic and I wasn't brainy. I wasn't on the debate team, the choral speaking team and nobody knows about cheerleading those days. Even if we have a cheerleading team, I wouldn't be on it anyway.

The only position I hold at the time was librarian from Form 2 and stopped when I was in Form 4 because I went to boarding school. (I'm still puzzled how as mediocre as I am, I still get to go to boarding school.) I applied for the position in boarding school but I didn't get it. It was quite a relief though because they have to wear green uniform and we call them Katak (frogs).

I'd like to think myself as a late bloomer. When I was in primary school, I was a nobody and my teacher hated me. She didn't believe me when I said I got 3As for the main subjects (Malay, English, Math) and eligible to apply for boarding school. However, socialwise I was OK. I have friends and I was never alone during lunch.

Jump to secondary school. I still didn't hold any position but I join as many clubs as I can. I also became a librarian which was really fun. Still no problem in the social scene but still not one of the popular girls or the smartest student.

Form 4, I went to boarding school. I remember I made a conscious choice to improve myself and be more assertive. It's a new environment, lots of new people, a new beginning! Suffice it to say, those 2 years were the best years of my life. I learned a lot, made a lot of great friends who I still keep in touch with until today, hold a few 'important' positions (if you think AJK Biro Kaunseling and Secretary for the choir club as important), had a lot of fun. I was quite popular but I think it was only because I mix with the right people and I was in a gang (that story needs another post altogether). Oh yeah, I also won a couple of prizes for short-story writing, something that I'm really proud of, even though on hindsight the stories sucks big time. I also did volunteer work for a closed netball tournament, that was fun too.

That was my school life in a nutshell. A bit bland but I think I turned out OK. I don't do drugs, never got arrested or ended up in a back alley of a sleazy area. I have a pretty good job, pretty much well-liked by my friends (as far as I know) and so far all my bosses loved me (I guess). As far as life in general, I still think I'm not fulfilling my full potential yet but I'm working on it. In the meantime, I have these tokens to remind me of who I was before.

I'm glad I'm part of your happy school days at boarding school. I hope I was a good friend to you as you were to me. Thanx pal, luv ya, miss ya.

Ahh... if i knew then what i know now...
school would have been a riot, although i'm still glad i didn't do half the things i wanted to do and more than half the things i did, i wish I had not. For better or worse, it did turn you out to be the person you are now. Bet it would be hell to blog from the back alley of a sleazy area after getting arrested for doing drugs. MetalDog

it sure would make a good material though... I can just imagine the title, "Memoir of a back alley girl"