B Gone Mister, B Gone! 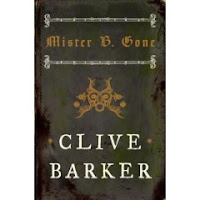 I am a fan of Clive Barker, that’s for sure. I like his books, I like his art. But his latest work really disappoints.

Behold Mister B. Gone. The book supposedly contains the soul of a demon from the Ninth Circle of Hell, the lowest level in the worst place you ever want to be. When he was young, he was an abused child (if you can believe it) and forced into this world by ‘Fishermen’, people who purposefully went out to find creatures like demons, trolls and such. So, he was caught by one these people around the 15th century, I think and thus began the journey of Jakobok Botch aka Mister B.

Oh yeah, I forgot to explain my previous statement. When I said “contains the soul of a demon”, I meant what I said. When you read it, Mister B is actually telling you the story from within the pages. He lives inside the pages and at every moment begging you to stop reading and burn the book. It was kind of creepy and after a while I was tempted to burn the book but for different reasons.

For someone who has interest in good and evil, angel and demons etc, what could be better than having a demon reside in a book. However, I’m not really sure about Clive Barker’s execution for this one. The setting is very interesting. After he was caught (and escaped) he quickly found another demon who was travelling the world looking for great inventions that might/will change the world. Until finally they heard a man called Gutenberg of Mainz.

Everytime the story gets interesting, Mister B, the narrator and resident demon, would try to convince, scare or threaten me to burn the book. And he would just go on and on and on and believe me I almost obliged his request just to make him shut up.

All in all, this is a disappointment. But then, I’m not swearing off Clive Barker yet. I’m waiting for the continuation of Abarat. I just wished he would concentrate on that after this.
at 11:11 PM