I don't know about MDB since I'm not really a fan of Eastwood (the actor and director) and I never really cared about boxing movies. But the movie got to me during the second half when I realized that this is not another Rocky. Swank deserved an Oscar for this one. Who cares if it's too early for her to get a second nod. Take away the political bullshit and just give credit where its due. But I cannot say the same about the rest of the cast. I feel that Freeman was doing another Shawshank Redemption while Eastwood was not that convincing as the hard-hearted guilt-ridden trainer. I don't know why he got the nomination.

The topic of how a virtual unknown rises above anyone's expectations and the relationships that were formed and broken along the way has been explored many times in films in various forms. But Eastwood didn't offer anything new. Supposed to be an emotional movie, it didn't really tug on my emotion until much later. In short this movie was not consistent in terms of acting and story.

The Aviator was not that impressive to me at first since I don't know who the hell Howard Hughes was before this movie came out. But the glamorous look of the period was perfectly captured by Scorcese. The star-studded supporting actors like Jude Law, Alan Alda, John C Reilly, Ian Holm, Alec Baldwin, Cate Blanchett, Kate Beckinsale and many more, make this movie a very nice treat.

A check at IMDB revealed that Scorcese shot the film in a way that it will look like how a color film would look from that period of time.

Achieved mainly through digitally enhanced postproduction, Scorsese recreated the look of Cinecolor and two-strip Technicolor. Watch in particular for the scene where Hughes meets Errol Flynn in the club. Hughes is served precisely placed peas on a plate, and they appear blue or turquoise - just as they'd have looked in the primitive two-strip Technicolor process. As Hughes ages throughout the film, the color gets more sophisticated and full-bodied.

Now if this is not considered as filming genius I don't know what is. In addition to another great performance by DiCaprio, I think this movie would rise as the big winner of this year. However like past years, this will not guarantee that Scorcese will take home the Best Director award. I'm not a fan of Scorcese either (in fact I don't think I have any favourite director, ok maybe Tim Burton). I watched The Godfather trilogy with the response of "Eh? So what?". Gangs of New York didn't impress me either. I think it got something to do with the actors. I was busy trying to convince myself that DiCaprio was a thug and Diaz was a girl who had a hard life. It didn't really sink in. But I feel that The Aviator is great. At least it's better than MDB. It will get Best Film but I'm not sure about Best Director.

I was also torn between Foxx and DiCaprio for Best Actor (lets face the facts here, the rest didn't have a chance, not even good ol' Johnny Depp). I was sure that Foxx would be a sure winner but after watching Ray, I just don't feel that his performance was that great. For me a great performance must be tied with consistency. You must be able to grip my attention from the very first word that you uttered. And Foxx doesn't look that comfortable in Ray's seat at the beginning of the film. He was still not Ray Charles in the first few minutes of the film. But he did made it up with a very emotional performance in the second half.

DiCaprio was consistent probably due to the fact that he's used to dramatic roles, unlike Foxx. But I think his face got in the way. Everytime I see him, I would be reminded of the image of him floating with a plank of wood, getting pale and dying. He just couldn't cover up his pretty heart-throb face no matter how great his performance was, not that I blame him. It's just the way I perceive him. To me he will always be the pretty boy who can act. On the other hand, I was able to forget Foxx the comedian and Foxx the Ugly Girl (his regular character in In Living Color) while watching his performance in Ray.

The Oscars have a history of awarding performances that are totally unlike the actor in real life like Halle Berry the depressed mom, Charlize Theron the serial killer, Mira Sorvino the prostitute, Hillary Swank the tomboy, Robin Williams the reserved quiet psychiatrist, Zellweger the country girl... well you get the picture. So if they were to follow this tradition than by all means give it to Clive Owen and Natalie Portman. The reserved Owen played a passionate, opinionated doctor who never fails to voice out his thoughts while the sweet little Miss Portman played (gasp!) a stripper. Well I watched Closer and I do feel they deserve to win. It's a sure win for Owen, but Portman has to watch out for Blanchett.

And just for the heck of it, these are my predictions for the rest of the categories. Most of them are lucky guesses anyway. 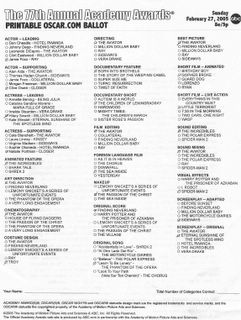