Another game to movie adaptation. Hollywood has proven time and time again that they really are running out of original ideas.

This movie is not one of those highly anticipated movie of the year like Harry Potter 4, King Kong and Sin City was. So I didn't know that this movie is coming out until they started to run the promos on tv. I saw this weird scene where you can only see the front of the gun and monsters getting blasted one by one in front of you and I thought, that looks very familiar....

Oh yeah... I've done that before. I've had my share behind the gun and shooting a significant amount of monsters back in the day. I played Doom before although for a very short time. I was in US and just got my very first computer. Of course I was very gung-ho to try all those cool games I was only able to watch other people play. One of the perks of being in the US is that they sometime sell old game titles really cheap and that's how I got my hands on Doom.

I guess it's true what they say, there's nothing more satisfying than blasting the heads off of some stupid, ugly monsters without the risk of hurting yourself. However, I did kind of hurt myself playing Doom. The interface was a bit confusing and moving around the maze while keeping your eye out for monsters and crazed scientists gave me a headache. This was my first first-person shooter type game. After a few rounds I called it quits and decided that this type of game is not for me (I'm more of a role-playing, strategist, Gabriel Knight, Civilization, Zeus type of gamer).

I was excited that someone wanted to adapt the game to the screen. Finally, something familiar for a change

. And I was excited that they brought in the first-person shooter view into the movie. I was even more excited to learn that The Rock is going to be in it

But the excitement didn't end there when I got another pleasant surprise a few minutes into the show. This guy was in the movie too.

aka Ceaser from Xena the Warrior Princess 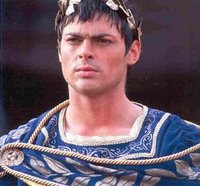 The plot was as unoriginal as the basis of the movie. I don't remember the story of Doom the game but the movie is nothing new compared to other sci-fi action movie. A group of soldiers were sent to some far-way place to answer a distress call. The whole team seems to carry personal baggages heavier than their guns and survival kit. We got a psycho, a nervous wreck, the guilt ridden and a horny toad to name a few. For an elite team they don't look pretty elite to me. I wouldn't trust these guys to exterminate the rodents in my house. I'm afraid they'll end up blowing the whole house and the tenants along with it. But don't worry, they don't last very long. The only different thing about this particular movie was that a black dude was not the first to die.

However, they saved the best for last. It was what we were all waiting for... the first-person shooter view that they've been promoting left and right for. 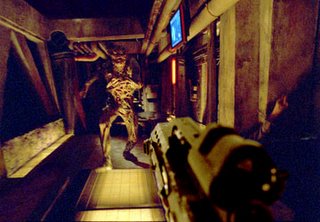 I have to admit, it was pretty cool. I even remembered shooting this little guy,

Pinky Demon
But it was too long for my comfort, I started to get dizzy and I recalled why I stopped playing the game in the first place. I think it would be better if they didn't focus all the first-view shots at this one sequence. They could have used it a few times throughout the movie with different characters and different weapons, then the audience would really get the feel of the game.

To conclude, let me just add one more good thing about this movie, this makes one hell of a cool group photo 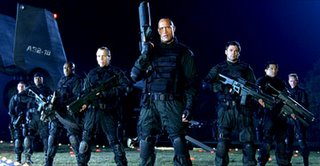 Shoulder your weapon soldier!
at 10:37 PM